On a late morning visit to Basai yesterday with Hassath, Pooja, and Ramit, we saw a small pipit in the hyacinth just off the road, perhaps 6–8m away from us in excellent light. It was clear even at first glance that the bird wasn't quite right for Rosy Pipit (which I have seen often in winter and on their breeding grounds). We watched the bird for about a minute as it fed near a Citrine Wagtail.

The most striking difference was its plain face with pale lores, no dark eyeline, and hardly any supercilium. The beak was short and conical, and the lower mandible (at least) was pale. It was heavily streaked, but looked cleaner and brighter than Rosy. The streaks along the flank were thick and dark throughout their length. The colour of the upperparts was brownish, not the waxy greyish or olive typically shown by Rosy, and the rest was whitish with no yellow tinge, including the margins of the median coverts and the tertial edges. The legs were pale pink. I tried to see the hindclaw and rump on general principles, but didn't get a good look at either. The call was a striking tsweeep, which reminded me of a Tree Pipit, with none of the raspiness of Rosy's call.

Ramit was only able to get one poor photograph, but it's good enough to differentiate from Rosy and Tree Pipits, and confirm our eventual identification as Red-throated Pipit Anthus cervinus (a possibility which struck me only about an hour after we saw the bird, at which point we realised that the descriptions and illustration in the field guide matched our recollections and Ramit's photograph). 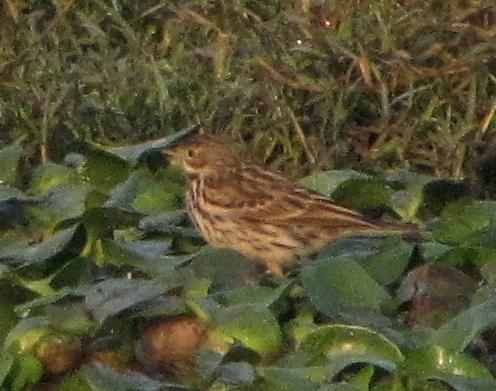 There are no recent records of Red-throated Pipit in the Delhi area, but it is more likely overlooked than absent. I would be grateful for any information about other records in North India.

Other sightings included Eurasian Hobby and Red-necked Falcon, hundreds of Bar-headed Geese, many Common Snipes, flocks of several hundred Barn Swallows, and a few House Sparrows of the migratory parkini race, the males with a yellow beak, small black bib, and fine dark streaks on the breast.