Lars Svensson's classic “Identification Guide to European Passerines” was first published a few decades ago. It is no longer available from Amazon, but I have been keeping an eye on copies from other sellers on the Amazon marketplace, and I am increasingly puzzled by their proposed prices.

The absurdly high price isn't because the book is new, because there's a used copy for sale at $1847.20. Even the cheapest used copy right now is priced at $458.60, and that's still far more than I can imagine anyone wanting to pay.

The sellers don't look shady at first glance, and many are highly rated over a significant period. Maybe they didn't notice that the book is available elsewhere for twenty-odd euro? But no, it's probably an “algorithm” (note: those are scare quotes) at work.

Every morning, children stream past our house in both directions on their way to school. There are the nearly grown-up, very self-conscious young ladies on the way to the inter-college, dressed in blue and white with neatly plaited and be-ribboned hair. There are groups of brown-and-white children, always squabbling over some snack. There are tiny red-and-blue primary school kids who drift past like tumbleweed—so easily distracted that it's a marvel that they ever make it to school.

And then there are the troublemakers, the wretched blue-and-brown boys who derive entertainment from pinching the valve-caps off our car tyres, or snapping off the occasional windshield wiper. We stuck a webcam in the window overlooking the car to keep an eye on these miscreants. It worked pretty well. A few of the smaller children still write their names on the windows when the car is dusty, but we haven't lost any more valve caps. 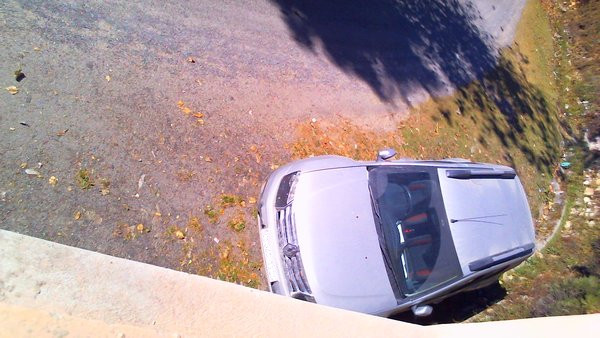 But now the webcam has become a local attraction, and we hear children of every colour walking past talking about the “CCTV”, bringing their friends around to point it out, and waving or posing (or dancing!) for the camera. A blue-and-white pair—not yet as serious as their elder sisters–recently made faces at it and ran away horrified but giggling when I replied with a cheerful “Hi”.

A month ago, Sarah Sharp posted to say I'm not a Linux kernel developer any more and I am no longer a part of the Linux kernel community.

She added USB 3.0 support to Linux (via the new xHCI host driver) and contributed in many other ways to the USB stack. She also did her best, in the face of an absurd level of outright hostility, to ask the kernel development community to adopt a more personally respectful tone of communication (which has nothing to do with political correctness, but is just about basic human decency).

It's a real shame that Linux has lost a valuable contributor and member of the (newly-formed) Technical Advisory Board. A shame, but hardly a surprise. If anything, it's surprising that she stuck around long enough to achieve as much as she did.

Incidentally, a Documentation/CodeOfConflict file was added to the kernel in February 2015. Among other (fairly vague and conciliatory) things, it says:

If however, anyone feels personally abused, threatened, or otherwise uncomfortable due to this process, that is not acceptable.

I'm sure the people who wrote this had good intentions, but I wish they could have found wording to make it clear that it's the personal abuse, threats, and other such behaviour that are unacceptable, not feel[ing] … abused, threatened, or otherwise uncomfortable.

Or maybe the wording is fine. Hard to tell, really.

Some weeks ago, I received a very spammy-looking email Request for Papers from the editorial team of Academic Journals Online (cfp@academicjournalsonline.co.in). Nine times out of ten, I would have deleted it without a second thought, but something about it annoyed me enough to investigate further.

I went to their web site (academicjournalsonline.co.in) and had a quick look around. The journals are all named "International Journal of Trends in …" (Computer Science, Multidisciplinary Engineering, Medical Science, etc.). The site claims repeatedly that they are open-access, but charges INR 500 to see more than the abstract of any paper. (The list of papers was accessible in mid-January, but has been made "Members-only" now.) I found no credible independent references to any of these journals.

I get more email from readers about my git-website-howto article than about anything else on my web site. I'm a little surprised by this (I always thought people would like the git-central-repo-howto better), but I'm happy to hear from people who found the article useful. (Aside: many of the notes say "Thanks, this was helpful"; some also ask a question or two. A few are incomprehensible requests for assistance, but I can remember only one of those ever turning unpleasant.)

A few people have contacted me to ask for permission to translate the article—into Belarusian, Bulgarian, Brazilian Portuguese, and Ukrainian so far. I know none of these languages, but the requests were polite and did not set off any mental alarms, so I gave permission and added links to the resulting translations.

Last year, a Bulgarian reader wrote to (say thanks for the howto and) tell me that the quality of the Bulgarian translation was terrible. He thought it was probably done mechanically (e.g. using Google Translate), and pointed out that the site where the translation was hosted also had many other dubious translations of technical articles. I took the link down (though it may have been too late to reverse whatever SEO benefit they had enjoyed in the meantime).

Last week, I received a request for permission to translate the article into Ukrainian. It just so happens that I can read the Cyrillic alphabet quite fluently (but I know next to no Russian), so I compared the output from translate.google.com and the translated version I was requested to link to. Surprise! It was almost identical. I wanted to do the same with the Belarusian translation, but the link was dead and redirected to the webhostingrating.net index page.

On the other hand, the Brazilian Portuguese translation by Thiago Belem appears to be genuine. Translating it back to English with Google Translate reveals certain changes in the article, which are certainly not the result of mechanical translation. So it seems unfair to reject all such offers, and I would certainly like to acknowledge the work put in by people doing genuine translations.

This leaves me with many questions:

Comments are welcome, especially from technical authors who have had their work widely translated.

Update (2013-02-05): Viacheslav Tykhanovskyi was kind enough to read through the Ukrainian translation and confirm that it's 100% crap.

I walked down to the market this evening to buy some textbooks for my daughter's new school year. I bought three out of the six needed at the first shop, and another one at the next. The third shop I went to had an old man slowly adding up the prices of a stack of items, while a crowd of customers gathered around.

In the shop was also the man's young daughter, who was doing much of the fetching and carrying. She darted out to ask for some change from a shop nearby, then returned and started dealing with the waiting customers. I asked for the two remaining textbooks, and she checked and said they had only one. Another customer asked for a certain kind of pen, and she went to see if they had any. A third customer gave up on the man and stepped around to her side of the counter.

Throughout all this, the father was (while still adding up numbers) grumbling about her. When she left to find change, he complained that she had not braced the flip-top counter correctly. When she asked him where something was, he would reply as if greatly put upon (paying no heed to the customers). He ignored some of her questions, and snapped at her when she repeated herself to double-check if they had the other textbook.

She brought the textbook from a shelf to the counter. Then she took a sheet of plastic and a roll of sellotape, and covered the book with a few swift, well-practiced movements. She took my hundred-rupee note, and politely asked another customer what they wanted while looking for change in the till. When she couldn't find change, I offered to come back for it later; but she asked if I was sure I didn't need anything else (pen? notebook? file?), and I realised that I could use a new pen.

By this time, her father had finished with the stack, and moved on to the next customer. Then he scolded her for being in his way.

I've always been bad at judging ages, but the girl looked only a couple of years older than my fifteen-year-old daughter. Or perhaps it was her spectacles that made her look older. I smiled and thanked her when she handed me the neatly-wrapped textbook and pen, but she was already turning away to attend to another order.

I never did get that last textbook.

Ammu is studying Newton's laws of motion this year in Physics, but she can never remember what the three laws are (partly because they don't seem to be stated clearly in her textbook).

I learned the three laws from a very old-fashioned British textbook that belonged to my great-grandfather—long before I had internet access—so it was a treat to be able to look up Newton's original formulation in the "Philosophiæ naturalis Principia Mathematica" on Gutenberg. After the preface and a series of definitions followed by explanatory notes, the laws of motion are presented in a section entitiled “Axiomata sive Leges Motus” (“Axioms; or, The Laws of Motion”).

In other words, “Every body perseveres in its state of rest or uniform motion in a straight line, unless a force upon it compels it to change that state.”

I learned how to type by trial and error on my mother's green Olivetti typewriter, and after a few years of using computers, my four-fingered technique served me well enough that I didn't think about learning how to touch-type "properly".

Over the past few months, however, I've tried to use more fingers efficiently, so that I don't have to move my hands as much. I adopted the conventional finger positions for a week, found they didn't suit my big hands (reaching non-alphanumeric keys on the keyboard was painful). Now I've found a more comfortable position, and I can type accurately and reasonably fast (though not as fast as before) without hurting my hands.

Unfortunately, the price I paid was in losing the ability to fall back to my earlier technique, and the loss of speed—though not an impediment in practice—has rankled.

This is a "Space Invaders"-style game where you have to type falling words to eliminate them before they reach you. It has a few annoying bugs (sometimes the word you're typing is hidden behind others), but it's extremely addictive nevertheless.

A letter arrived by email today addressed to "Dear Advisory Boar" and asking for advice about working a freelance job while learning how to program.

Today's The Hindu—not for the first time—had an extra front page devoted to an advertisement from IIPM, complete with gushing top-half copy masquerading as news reporting. Over the past year or so, Arindam Chaudhuri's snake-oil salesman grin has been a frequent visitor to the back page of The Hindu, and many an innocent exclamation mark has been sacrificed to extol the virtues of IIPM. I can't even begin to imagine the amount of money that must change hands for this kind of coverage.

I'm not sure if it's more depressing that IIPM has accumulated such vast quantities of money by selling snake-oil, or that The Hindu is happy to soak it up and print acres of whatever drivel is sent its way.

(For those who are wondering, IIPM is the Indian Institute of Planning and Management, an unaccredited business school that is in the habit of suing anyone who points out that their advertisements are full of lies.)