The mains power supply in Lweshal is dismal.

There are frequent outages, of course—the transformer in the village blew up earlier this year, and we had no power for a week. Two or three times in the summer (when forest fires were burning everywhere) a tree fell on the line and cut off power for a few days. There's a big fuse near Mauna which seems to keep melting down. But none of that is really a surprise in a remote area.

The unpleasant surprise was how bad the supply could be when there's no outage. For some reason, extreme voltages are quite common. I've seen the mains voltage at a record low of 25V for several hours once, and we've had whole days when it stayed around 60–90V—voltages so low that the electricity meter stayed off, even though our 9W LEDs inside would light up. Free power!

High voltages don't last nearly as long, but we've seen spikes of 300V and more on occasion. It's difficult to decide which condition is more destructive. High voltages fry appliances, but persistent low voltages where some lights appear to work encourage people to draw more current than their circuits can safely carry—and in a place where people use 1.0mm² wire even for 16A circuits, and nobody has any earthing, that isn't something to be taken lightly.

Either way, voltage fluctuations blew up our UPS twice. The first time we didn't have any sort of voltage regulator installed. After having to pay for a new logic board, we installed a custom-made "constant voltage transformer" (a big auto-transformer with a voltage meter). It clicked a lot to indicate its displeasure, and we had to take it back to the shop to make it cut off the output altogether if the voltage was too low (but why didn't it do that to begin with?). Then the next fluctuation killed the UPS again.

In such a dire situation, only a device with a genuine superhero name could possibly save us, and the Accurex DPM-3000 certainly delivers on that front. I bought one from Amazon, and we installed it upstream of the main distribution board. It doesn't do any voltage regulation, just cuts off the output beyond the predefined low and high voltage thresholds. Here is it in action. 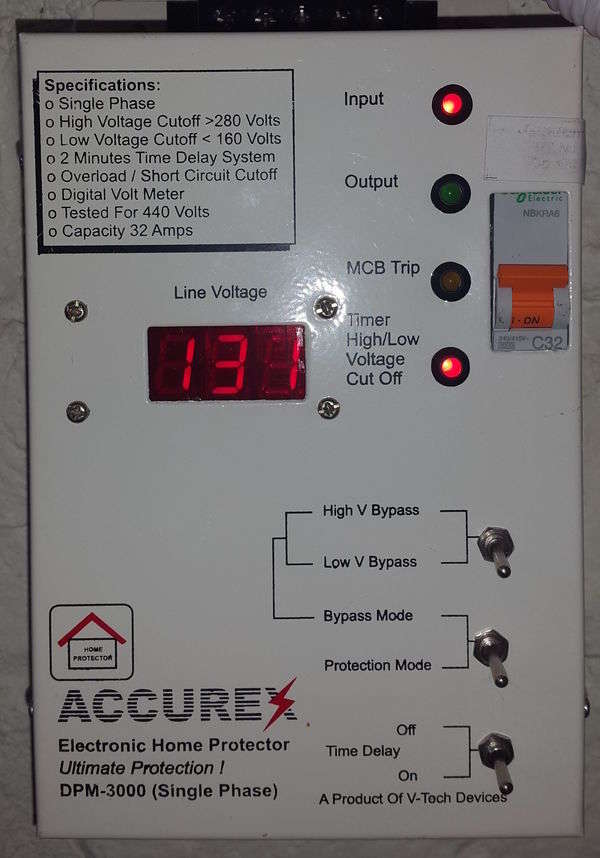 It has worked correctly in various low-voltage conditions (we've had a 130V supply for most of the past two days). It has high- and low-voltage bypass modes that I have never tried, and an optional output timer that restores power to the house only if the power stays on for two minutes. It's useful that it displays the input voltage (even when the output is cut off), and the 32A circuit breaker is very handy when we're working on the distribution board.

Other Amazon customers assured me that the device makes no noise during operation, but of course it does. It clicks away merrily, but it's a small price to pay for reliable voltage limits.

Update (2017-04-23): Our low- and high-voltage records for the Accurex are 43V and 592V respectively (both voltages persisted for some hours before returning to normal).