I'm back after three weeks spent in Karnataka, a state in which my bird-watching experience has been woefully limited until now. With my family, I spent a few days in Bangalore en route to and from Madikeri in Coorg. I also did a hectic two-day birding trip to Manipal and Karkala, but spent most of my time sipping a fine blend of robusta and arabica coffee in a chair on my hosts' front verandah in Madikeri, watching the birds who visited the garden.

The bird of the trip was undoubtedly the Greenish Warbler. These birds are usually seen only in passage through Delhi, so I relished the chance to observe them at length. I heard many of these birds singing—probably individuals who had arrived in the area recently. (Siberian Chiffchaffs and Hume's Warblers—both rare in the south—also sing for a while after they arrive in Delhi. Like them, I'm told Greenish Warblers also start singing again just before the spring migration.)

Although I did so little "serious" birding, I ended up with a total of a hundred and sixty species, of which nearly fifty were new to me. Despite (or perhaps because of) the length of this trip, this report is just a brief summary of the birds I saw.

We spent a few hours in the morning walking around near the Bannerghatta Zoo with Deepa, Vinay, Krupakar, and Rohit. This was a short outing made shorter by forest guards shooing us away from a promising trail, but we managed to see quite a few interesting birds nevertheless.

The highlight of the visit was, of course, the many Greenish Warblers singing in the trees by the lake. I also had my first meeting with the black-backed southern race of the Indian Robin, and was delighted to see and hear my first pair of Jerdon's Bushlarks (although the Rufous-tailed Lark eluded me entirely). Other sightings:

We also saw several webs of the Giant Wood Spider, with the huge black and yellow striped female in residence at the centre and the tiny red male far to one side, looking decidedly more like a morsel than a mate.

On the 8th afternoon, I took a KSRTC bus from Madikeri to Manipal, and arrived late in the evening after a tiring journey. I was up bright and early the next morning to join Ramit on a walk around Manipal. We spent a few minutes looking for Nightjar roosts while listening to distant Grey Junglefowl, but quickly moved on to other birds. We had a very good morning despite the heat and humidity.

Apart from the many Greenish Warblers, we also saw some Bright Green Warblers P. (trochiloides) nitidus and heard their distinctly trisyllabic call.

We took an auto rickshaw to End Point afterwards, but we were a bit late and saw few birds in the heat apart from some Malabar Larks and a flock of White-headed/Yellow-billed Babblers. Ramit's friend Kanika joined us in the afternoon, and we took a bus to Mulki (or Mulky, depending on which signs you look at) and an auto to a village on the coast.

It was too early in the season for most of the migratory shorebirds, but we did see some Whimbrels, a few Greenshanks, and a flock of Sanderlings flying from one island to another. In the distance, we also saw some Heuglin's Gulls and Greater Crested Terns diving for fish. Other sightings include:

We had planned to return to End Point in the evening, but the bus ride back from Mulki to Manipal was so tiring that we abandoned the idea.

Ramit and I took a bus to Karkala the next morning, and spent some time birding near Shiva's house (where we heard a Heart-spotted Woodpecker). Later, Shiva drove us towards Muniyal forest, and on the way we saw a Large Cuckooshrike, many House Swifts near a bridge, and twenty-one Crested Treeswifts sitting on an electric wire (with a pair of Ashy Wood-swallows further down the line).

At Muniyal, our encounter with the Malabar Trogon was among the moments I will treasure. We heard a male calling in the forest, and slowly crept into the forest with leeches crawling up our legs, only to hear it going further and further away. We had given up and were moving on when we saw a small track leading into the forest. We followed it for a dozen metres or so, and a male Trogon silently flew up ahead of us and sat on an exposed twig for a good five minutes.

Once we had our fill of following that Trogon, we returned to the main road only to find that one of the car's tyres had a puncture. Shiva was retrieving the spare tyre while I jacked up the wheel. Ramit was engaged in idle contemplation when he spotted a female Malabar Trogon sitting so close by and watching us that it took him many seconds to point it out to me—I was looking much further away than I should have been! We left the car on the jack and watched (or, in Shiva's case, filmed) the bird for the next several minutes (and we saw another pair nearby). They were making very flycatcher-like sallies from a perch and returning to it or close to it, all in utter silence. At one point, the female landed on the road in front of us, Nightjar-fashion, and pounced on a passing grasshopper in a flurry of wings. 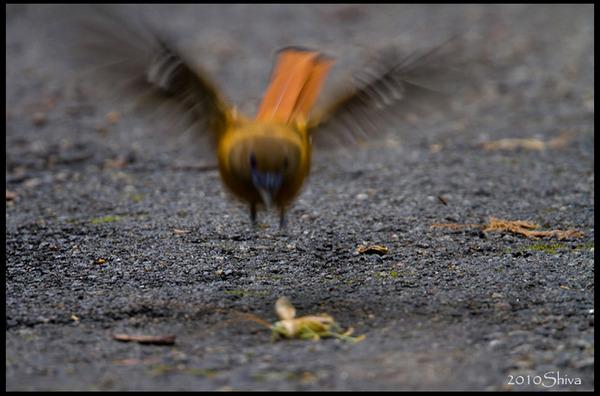 At Muniyal, I also heard three distinct Greenish Warbler calls—the usual slurred disyllabic call, the distinctly trisyllabic nitidus call, and another disyllabic call from a bird that was clearly a Greenish-type Warbler, but whose call was noticeably different from the first (it was easy to compare because they were all calling at much the same time). I also spent a lot of time following a very yellow-looking Phylloscopus, but it turned out to be just another Greenish Warbler.

We returned to Manipal, and Kanika—who was working on assignments—joined us for a leisurely trip to End Point, where I added Oriental Skylarks to Ramit's checklist, and we waited for dusk to see Nightjars. We heard all three species (Indian, Savannah, Jerdon's) clearly that evening, but saw only a single Indian Nightjar.

I want to specially thank Ramit and Kanika for making me pay attention to the many butterflies (which I enjoy watching, but know nothing about) we saw throughout the trip. They were able to identify most of them, and many of the same species were to be found in Coorg. I especially liked the Southern Birdwing (India's largest butterfly), the Crimson Rose and its mimic the Common Mormon, the spectacular Blue Mormon and Clipper, and the Common and Evening Bush Browns.

I spent the most time and the least effort in Madikeri, but enjoyed my stay there thoroughly. Greenish Warblers (of only one race, alas) kept me entertained for the whole of the two weeks that I was there. Other birds seen in the garden or while walking around town include:

If I had made a bit more of an effort to get out to the outskirts of the (tiny) town every morning, I would no doubt have been able to enlarge my list considerably. But I was quite content to be lazy.

My friend Nitin took me one day to his ancestral land near Bittangala, about seven kilometres from Virajpet. When we got out of the car, the first thing I saw was an adult Rufous-bellied Eagle floating in lazy circles over the edge of the forest. I could have gone home happy, but there was much more to see.

The land adjoined a devarkadu (sacred grove) and a large wetland. I walked along the edge of the forest for a while (making no attempt to go any deeper), admiring the myriad spiders, butterflies, dragonflies, and the occasional large mixed hunting party of birds (Fairy Bluebirds, Bronzed and Greater Racket-tailed Drongos, Velvet-fronted Nuthatches, Golden-fronted Leafbirds, Bar-winged Flycatcher-Shrike, Black-lored Tits, etc.). Later, I sat in a clearing between forest and wetland, and observed huge flocks of Malabar Parakeets, Malabar Starlings (the southern race of the Chestnut-tailed Starling), Orange Minivets (the spectacular southern race of the Scarlet Minivet), Chestnut-headed Bee-eaters, and other birds:

I also saw a baby Malabar Giant Squirrel (but, alas, not its parents).

On another trip to Siddapur in southern Coorg, I saw many of the same birds as in Madikeri; one notable sighting was of a Crested Hawk Eagle in flight.

The day after we returned to Bangalore, I spent a delightful morning at Nandi Hills with Vinay Das and Mike Prince. (We had originally planned to visit Hesaraghatta on the way back, but didn't have the time.)

Just off the highway, we saw a Nightjar fly across the road ahead of us, and stopped immediately. We heard an Indian Nightjar's distinctive call, but couldn't spot the bird again. On the road up to the top of the hill, we saw (among many other things) a Jungle Prinia, White-browed Bulbuls, many Yellow-throated Bulbuls, and heard some Indian Scimitar-Babblers.

The nursery/garden area near the water tank yielded most of the stars of Nandi Hills. I found a singing Tickell's Blue Flycatcher to begin with, and then we saw two Nilgiri Wood Pigeons sitting in the open on a tree trunk. A long wait yielded glimpses of a very vocal Indian Blue Robin and much closer looks at a Puff-throated Babbler (both species were calling constantly from the dense undergrowth). Other nice sightings:

We stopped for breakfast at a restaurant at the foot of the hill, and a pale Tawny Eagle flew up from somewhere and circled higher and higher until it was lost to sight.