Of the twenty-four illustrations contributed by Edward Buckley to John Ray's "Synopsis Methodica Avium et Piscium", the first one whose identity is not reasonably obvious is the "Madrass Jay", in the bottom left corner. From the illustration, I guessed that it was a Brahminy Myna, but a glance at the description showed that it could only be an Indian Pitta Pitta brachyura.

I wrote to the delhibirdpix list to ask for photographs of an Indian Pitta to post on this web page, and once again, Sharad Sridhar sent me a selection of photos (including one from Tamil Nadu, although the one below is from Karnataka). 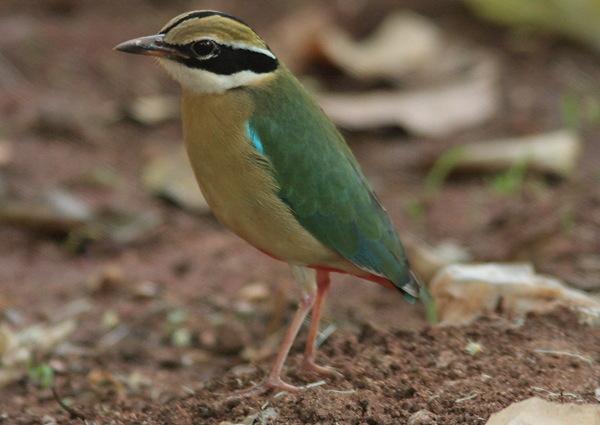 Here is Buckley's description, followed by my translation:

The "Ponnunky Pitta" above is another rendition of "Ponnangi pitta", the Telugu name for the Indian Pitta. We are fortunate that Buckley thought these names worth recording, although they are not given for all of the species he describes.

Then he says: it is "related to our Picae glandariae [Jays]", and has a "curved pale line above the eye" ("arcuata" means bow-shaped, as in the beak of the Curlew Numenius arquata. Note that the more brightly-coloured Blue-banded Pitta is named Pitta arcuata). The "upper wings are greenish, with the feather shafts turning yellow", and "near the base of the wing is a blue spot". The "flight feathers and tail become black", the "rump has blue spots" (Uropygium being from the Greek word for rump), and it "becomes red from between the thighs upto the tail".

The Pica glandaria that Buckley thought the Pitta was related to is the Eurasian Jay, now Garrulus glandarius (which is itself described by Ray in the main part of the book). I don't see any reason why he might have inferred such a relationship (the birds certainly don't look similar), but the Jay is mentioned in many of his other descriptions too.

The distinction between the colour of the upperwing feathers and their shafts (as well as the blue spots on the rump, not ordinarily visible) shows that the description was based on a specimen in the hand. Since this was written in the seventeenth century, less than a hundred years after the invention of the telescope, the good Doctor Buckley is quite unlikely to have observed these details through a handy pair of Nikon binoculars.

Another interesting aspect (also seen in the earlier description of the Painted Snipe is the tendency to describe changes in colour rather than colours in isolation. The wing feathers "turn green", and the flight feathers "turn black", and so on. I don't know if this was a general convention at that time, but Ray's (generally much more detailed) descriptions earlier in the book do not appear to use it often.

Anyway, the description together with the vernacular name allow us to unambiguously identify the species involved.

Feedback is welcome, especially towards improving the translation.