Krys Kazmierczak and I saw a couple of large, heavily-streaked Pipits in the grassland behind Sultanpur on the 2nd of January. We weren't able to get good scope views, but we saw (and heard) enough to be sure they were not Paddyfield Pipits; given the Richard's Pipit sightings only a week before, we concluded that these must be the same species.

I still had some doubts, however, because the birds didn't look as large in flight or on the ground, and the fine dark streaks on the breast were more well-defined (besides the habitat being so different). Since I had not managed a good look at them, I returned to Sultanpur with my friend Ram (on his first birding trip around Delhi) and Sharad Sridhar.

Indeed, the birds at Sultanpur turned out to be Blyth's Pipits Anthus godlewskii, another species of which there are few reliable records from North India. Sharad was able to get some excellent photographs with his new camera. 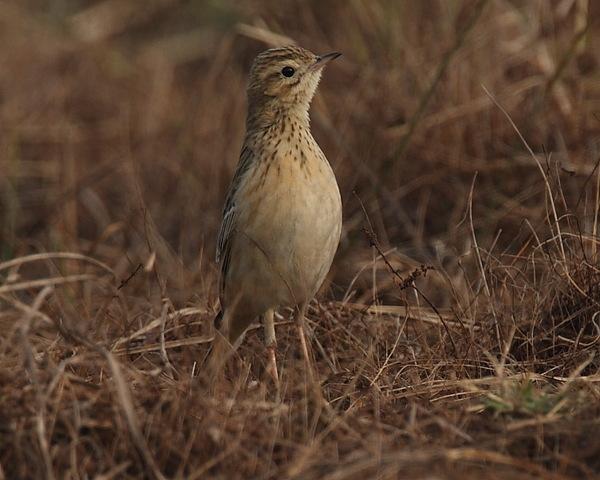 My field impression of these birds was very different from the Richard's Pipits at Dadri. These birds were distinctly smaller in flight, and not much bigger on the ground than the many Tawny Pipits nearby. They had a less heavy way of moving (but they were not in the sort of high grass that I saw the Richard's Pipits in), and though they did pop into an erect posture sometimes, they looked short-tailed when doing so.

They were also a less intense brown above, but the dark streaking on the back contrasted more with the paler channels in between. The pale edges of the wing feathers also contrasted more with the rest of the wing. (We even saw the squarish dark centres of the median coverts, the classic id feature for adult Blyth's). The crown was also distinctly streaked. The pale lores were obvious, but the malar stripe was not always as distinct (though I see a dark submoustachial stripe in photos). Some of the birds had shorter beaks (as in the photo) than others, but all had a similar very sharp-looking conical shape.

The calls were similar to the Richard's Pipits' calls, but were a softer and more squeaky PReeep. They were also sometimes followed by a quick chup chup when the bird landed after calling in flight.

One other notable sighting at the Sultanpur flats was of three Eurasian Skylarks Alauda arvensis. I thought they were Bimaculated Larks at first, because they were so much larger than the Greater Short-toed Larks flying nearby, but I then saw the prominent white outer rectrices and trailing edges to the wings and the streaked breast, and also heard the distinctive liquid warbling chirrrup call in flight.

What an excellent winter we're having.