I recently needed to provide a private document repository to a small group of people who didn't want to use Google Docs. I would have liked to propose DokuWiki running in my Sandstorm server, but there were too many existing .docx documents to contend with, and the users preferred to deal with a folder-based structure than a wiki.

I decided, after several hours of research, to use Nextcloud to store and manage access to files, and use OnlyOffice Docs alongside to view and edit the documents, spreadsheets, and presentations. This has worked out quite well on the whole, though it took some effort to set it up, and there were a few warts along the way. 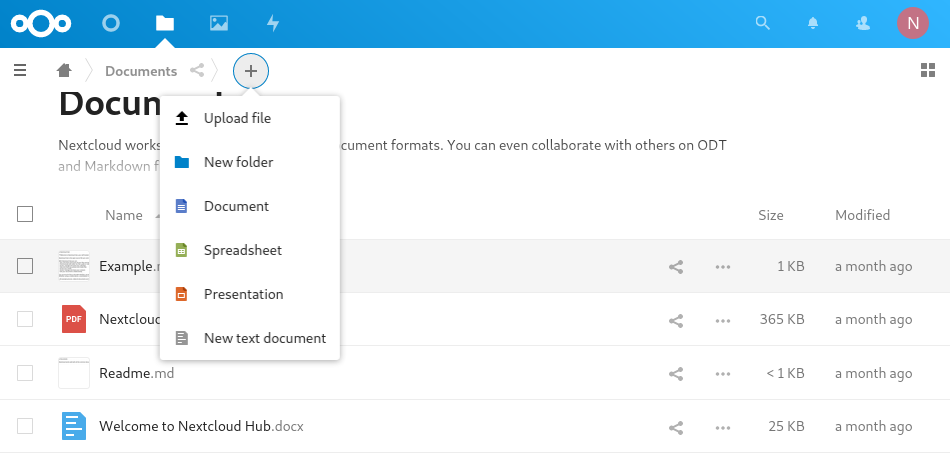 Some factors that went into this decision: both projects are open source and are actively maintained. Nextcloud supports all of the necessary file management features (especially sharing files with different permissions for individuals and groups) with a simple and pleasant interface; and the community edition of OnlyOffice is enough to edit most .docx files. There is also generally positive feedback from people who are using these two programs in combination.

I was not familiar with either Nextcloud or OnlyOffice, and it took quite a while to figure out the various moving parts and how best to fit them all together. This is my summary of the process, based on the experiments I did and the bits and pieces of documentation I consulted along the way. These are not step-by-step installation instructions, but they might save you some time and point you in the right direction.

Nextcloud stores files and manages access to them, so it's like Google Drive for our purposes. (It has many other features, and you can install all manner of apps developed for Nextcloud, but those capabilities were not relevant to me here.) It is also the interface that you and your users will interact with to create users, manage permissions, and upload files. (You can also view PDFs and collaboratively edit text or Markdown files.)

OnlyOffice Document Server edits files stored in Nextcloud and plays the role of Google Docs. There's also something called OnlyOffice Community Server; in theory, it may be able to replace Nextcloud, but I wasn't sure if all the relevant features were available in the open source edition. In any case, Nextcloud looked more solid to me, so I didn't try. 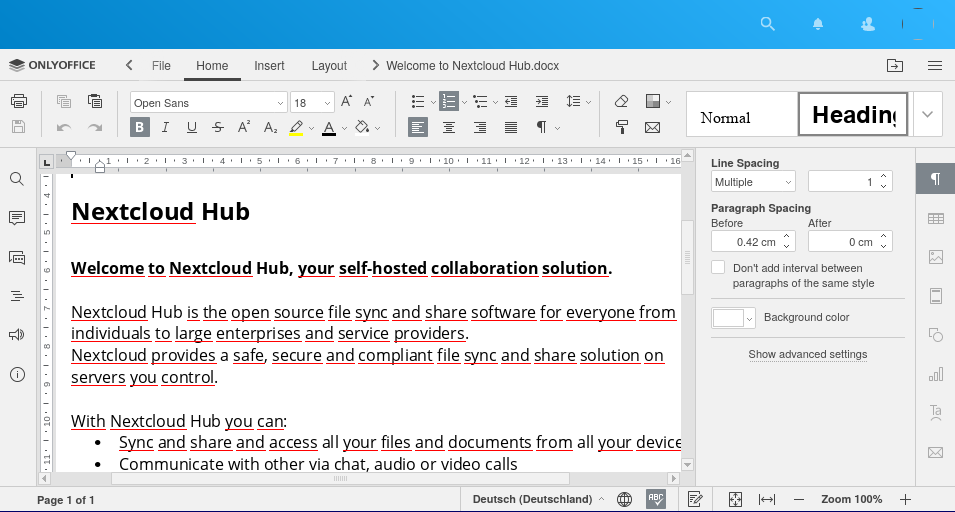 Nextcloud is written in PHP, while OnlyOffice is a Node.JS application. Both need a database (Postgres works) and bits of other infrastructure besides. The most convenient way to get started with them is to use the official Docker images (Nextcloud, OnlyOffice). Both projects also publish installation documentation (Nextcloud, OnlyOffice) if you prefer to install them directly on your server.

I made my life slightly harder by wanting to run both applications inside Docker containers, but also to use the nginx and Postgres servers that I was already running. I also wanted to use php-fpm to run Nextcloud, for better performance. It took a fair bit of experimentation, but I settled on a configuration that I liked. 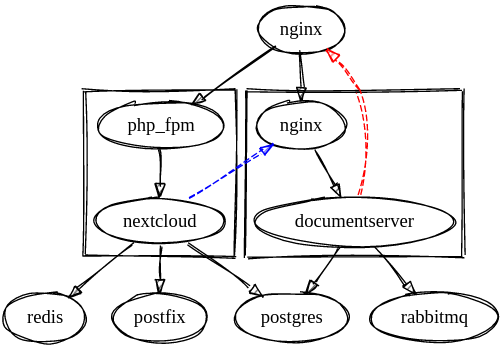 Users access this system as “nextcloud.example.org”, which goes to the system-wide nginx, which forwards to the Nextcloud container. The two dashed arrows show how the applications communicate with each other.

OnlyOffice also publishes some more details about the integration.

I used the nextcloud:fpm Docker image, which runs the application under php-fpm, a FastCGI process manager that nginx can forward requests to. This image has documentation, including examples of how to use it, and an nginx.conf to show how to configure the frontend nginx (see below). OnlyOffice provides another example of how to use both applications.

I used the onlyoffice/documentserver:latest Docker image.

This image is large, complex, and not particularly well documented. It runs the document server and associated services behind nginx, but also has Postgres, redis, and RabbitMQ installed, and it uses them unless you configure it to use external services, as I did.

I would like to get rid of the second nginx and build a simpler image that runs only the document server. For now, however, I run the image as-is.

I was already running nginx, so I added a new virtual host for Nextcloud, following the example nginx.conf. Here's the operative part that forwards PHP execution requests to php-fpm inside the Nextcloud container:

I used my existing acme.sh setup to generate a LetsEncrypt certificate for the Nextcloud application's domain. If you don't already have a way to handle TLS certificates for your domain, the Nextcloud documentation has some suggestions and Docker-based examples.

I was already running Postgres, so I just created separate users and databases for both Nextcloud and OnlyOffice. (Both applications will create their own tables during installation.)

I was already running Postfix, so I just configured Nextcloud to use that SMTP server to send outgoing mail (e.g., to notify you that someone has shared a document with you).

Redis (for Nextcloud) and RabbitMQ (for OnlyOffice) are optional. You can run them in Docker containers if you like, or run them on the host, as I did. As with the other services, you just need to point the application in the container to the correct port on the host.

I've written this up as a docker-compose configuration file, but I'm not publishing it here until I can fix the problem mentioned below.

To apply each upgrade, all I needed to do was to pull the new image (nextcloud:fpm and onlyoffice/documentserver:latest), stop the old container, and start it again with the updated image. Done.

I managed to solve various problems while setting the system up, but there's one big problem left — opening a document for the first time is unbelievably, painfully slow.

Clicking on a document in Nextcloud opens an OnlyOffice tab, which then spends a long time “Loading document”. Even the 25KB example .docx file that ships with Nextcloud can take several minutes to load. Usually, but not always, the file loads normally on subsequent attempts after the first successful one.

I haven't been able to figure out this problem, despite increasing the log level for both Nextcloud and OnlyOffice and poking around a bit. I tried to use the public OnlyOffice demo server, and that was also slow. There are some reports on the Nextcloud forum of this behaviour, but no conclusive analyses or solutions.

I'll update this page once I find a solution to this problem.

I'm not a Nextcloud or OnlyOffice or Docker expert, so I may not know the answer to your question, but you're welcome to ask. I also welcome suggestions to improve my setup or this article.

Write to me at ams@toroid.org