Since her return to India, Ammu has stayed in touch with some of the students from around the world who were in the hostel with her at the University of Osaka. One of her friends is from Québec, in Canada, and has an elder sister who is a talented cook and baker.

The two hostel-mates have now hatched an intercontinental plot driven by their shared love of eating nice things that they didn't have to make themselves. News of what elder sister last made in her kitchen is relayed to me, all casual like, with wistful hints about how delicious it must have been. Likewise, elder sister is kept informed about our efforts here. 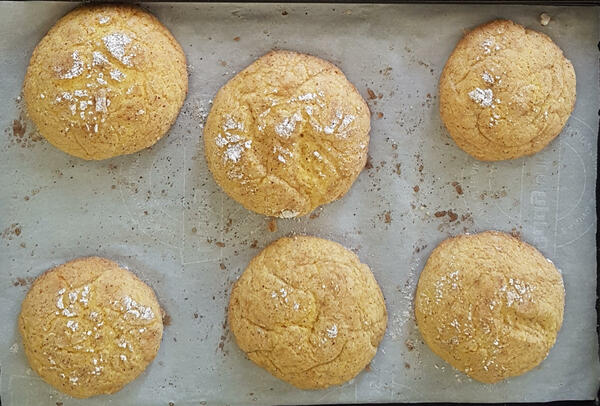 Snickerdoodles, along with pop tarts and other North American exotica, were something I had only heard about. I followed this simple recipe by Martha Stewart with promising results. Next time, I'll try to squeeze more liquid out of the freshly-roasted pumpkin purée, because this batter was too wet, and I had to add flour to be able to roll it in the dusting mixture of cinnamon powder and sugar. (I've never used canned pumpkin, which is what the recipe calls for.)

The first pumpkin we harvested was large enough to make soup, ravioli, two pies, a curry, and these cookies, with a little left over. And we still have three more pumpkins left.