Near the end of a hectic (but productive) work trip to Kolkata, Soma Jha was kind enough to take me to the Chintamani Kar Bird Sanctuary for a few hours. I spent most of the trip in a daze, but we found an interesting Phylloscopus warbler just as we were leaving.

It was a robust-looking bird with a long, slightly bulbous beak (i.e. not straight and sharp) with a bright orange lower mandible. It had a very noticeable yellow vent and undertail coverts, contrasting with its white belly. Its throat and upper breast were the same yellow. It had a long, pale supercilium and two distinct wing bars (the median bar being thinner than the other). It had a pale crown stripe with distinct dark stripes bordering it and extending all the way to the nape. These were visible from behind the bird when its head was up. It was overhead and the sun was against me, so I did not get a good look at the upperparts. My impression was that the face was a bit dull, and that it was a dull green above, with no contrast in the secondaries or tertials. I think it had pale legs, but I wouldn't swear to it.

My first impression was of a Large-billed Leaf Warbler, but the yellow vent and crown stripe eliminated that species. It moved around lightly in the tree, and seemed quite short-tailed. It was silent during the few minutes that we were able to observe it. Eastern Crowned Warbler fits based on structure, but has only a vaguely yellow vent and white throat (and a single wing bar).

Unfortunately, Soma was able to get only one unclear photograph, but it shows the yellow vent and throat clearly, and the consensus is that this can only be a Yellow-vented Warbler Phylloscopus cantator. I was a little doubtful because it is described as a small bird (and looks like it in the photographs on OBI), but perhaps its size is somewhere in-between delicate warblers like Lemon-Rumped and larger ones like Large-billed.

Update (2011-01-24): Amitava Sengupta got a good photograph of a Yellow-vented Warbler at CKBS. His photo (posted here with permission) confirms my impression that it was not a delicately-built bird. 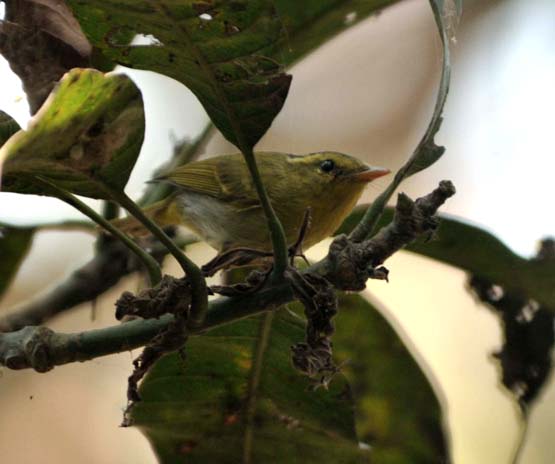 The Yellow-vented Warbler is known to occur in the North-east and in southern Sikkim, and has been seen in the forests near Dhaka, so it's no stretch to imagine it visiting Kolkata. But I do not know of any earlier records from the area.