Dr. Singal, Ramit, and I reached Akbarpur beel (pond) in Dadri early on a foggy christmas morning, and walked around the shallow wetlands amidst an expanse of agricultural fields, large portions of which have now been purchased for the construction of some residential highrise.

At about 0745, I saw a large pipit flying past. The distant view I had after it landed surprised me, because the bird stood out next to a big tussock of grass. Another bird flew past to join the first one soon afterwards, and its loud flight call drew our attention immediately.

We followed and flushed three birds from the grassy margin of a big open field near the water, with soft wet mud and ankle-high grasses and other vegetation. They flew into the field, where we were able to observe them closely for several minutes as they moved around. They maintained their distance, but were quite cooperative. (Later in the day, we flushed two more birds on the other side of the lake, but didn't get a close look.)

The poor light and high grass didn't help, but Dr. Singal managed to get a few photographs that were just about sufficient to confirm that these were Richard's Pipits Anthus richardi. 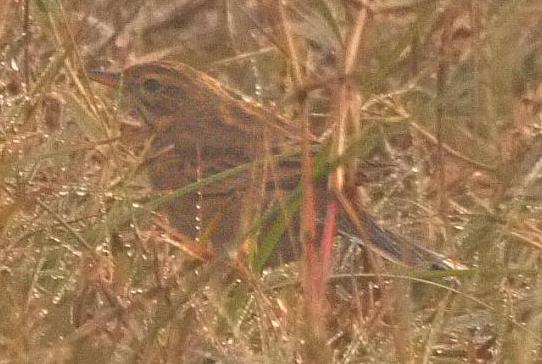 That these birds were much larger than Paddyfield Pipits was most obvious in flight, where they looked elongated and front-heavy with a prominent beak—somewhat like a Crested Lark, but with a very long tail. Their colour was also a much darker, richer brown than Paddyfield, with none of the latter's pale sandy tones. On the ground, they moved slowly in a crouch, but often sprang up into an alert and erect posture, making their long legs and tail very obvious. One bird kept reaching up to peck at a tall stalk of grass, giving us good views of its face and back.

I noticed a prominent dark malar stripe before I noticed the pale lores and long buff supercilium. The back had long and distinct dark streaks, but the streaking on the breast was unclear. I could not see any pattern to the dark centres of the median coverts, but there was little contrast overall between the upperparts and the pale edges of the wing feathers. The white outermost rectrices were visible as the bird walked around. We did not see the hindclaw, but the long beak had a blunt-looking tip and an orange lower mandible.

We did not see them rise high when flushed; rather, they stayed low over the grass and flew only a short distance before dropping down again. We heard them calling many times: a single harsh rolling squeeEERP, very unlike Paddyfield. The intensity varied somewhat, and birds on the ground seemed significantly softer than ones calling in flight.

Other sightings on a fine outing included a Paddyfield Warbler, dozens of Bengal Bushlarks and Oriental Skylarks, more Zitting Cisticolas than I have ever seen before, a pair of Barred Buttonquails, Common Snipe, a single Red-crested Pochard, an Indian Spotted Eagle, several Blackbuck, and a beautiful pair of Jackals. We also moved an injured Red Sand Boa out of the way of a tractor.

Update (2010-12-28): I returned to the site this morning with Atul Jain, and we found at least four or five Richard's Pipits in the same general area with barely any effort. We had good views of them in flight and, with some perseverance, on the ground. They stayed close to water and preferred clearings near stands of high grass. The light was better this morning, and the dark colour was very obvious in comparison with the Paddyfield Pipits we found en route. The white outer rectrices seemed to be visible nearly all of the time. All the birds we saw today had a prominent malar stripe and heavy streaking on the back. Some of them did rise very high and "bounce" when flushed.

I would be grateful for comments about which subspecies and population these birds are likely to belong to, and about other verifiable records of Richard's Pipit and its status in North India, where it is said to be rare. The species seems unlikely to be on passage here, and it will be interesting to see how long they remain in the area.

The other notable sighting this morning was of a magnificent Peregrine Falcon (of the migratory calidus race) flying directly overhead and trying repeatedly but, alas, failing to hunt down a House Crow.

Update (2011-01-02): A friend and I found some more large (non-Paddyfield) Pipits in the dry grassland behind Sultanpur National Park, but they turned out to be Blyth's Pipits. (We also saw two Black-throated Thrushes Turdus ruficollis atrogularis in the same place.)